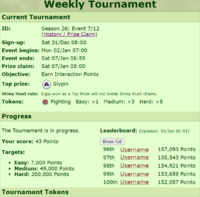 Hatch a Variety of Eggs

During the tournament users receive 1 point per egg or 10 points per unique species. Only unique eggs will avoid breaking Shiny Hunt chains. A unique species means an egg that has not been hatched during the tournament. E.G. A user hatches a single Charmander egg which equals 10 points; however, all Charmander eggs hatched after that first egg will result in 1 point per egg.

Variant eggs are counted as unique eggs meaning if a user hatches a Kantonian Vulpix and an Alolan Vulpix for the first time they will both be counted as a unique species.

Hatch the PotD Example
The Objectives to hatch eggs matching POTD, V~Wave, x colour in the Pokédex, or x Body style will have a link in the Objective. This link is usually the name of whichever it states to match and once a user clicks on this link a list will pop up of which Pokémon users should hatch. As long as the user hatches the Pokémon on the list or a Variant/Exclusive that matches the objective it will not break a shiny chain.

As for the objective to hatch eggs matching x nature. The best technique for this objective is to breed Pokémon that match that nature and have them hold an Everstone. The Everstone will give a higher chance for the Pokémon to pass down that nature to the eggs. Another technique is to shelter hunt eggs and check the egg's summary page to see if the parents are both holding an Everstone and match the nature. Nevertheless, if a user has a shiny chain and hatches a Pokémon that is not a part of that chain it will break their chain.

Any item counts as a "Valuable Item" in scour tournaments, not including the first Scour Retrieval of the day, Totem Stickers, and Zygarde Cells. Points are awarded based on rarity of the items found.

The Leaderboard is the more competitive aspect of the Tournaments. There are places for 100 users on the Leaderboard. The Show full button allows users to show all 100 places. Clicking this button when viewing all 100 places changes it back to viewing only 5 places. Staying on the Leaderboard requires the user to have a higher score than the user currently in the 100th place. The scores are updated approximately every hour. When the Tournament closes, the 100 users who are on the Leaderboard (or more if there are users tied for the 100th place) are awarded an Exclusive Egg; this egg changes with each event and one random egg given out is guaranteed to hatch as a Shiny, Albino, or (very rarely) Melanistic.

Note: The awarded egg will not break your shiny chain upon hatching. 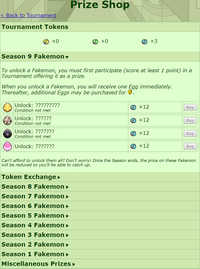 Note: Eggs that are bought from the Prize Shop will break your shiny chain upon hatching.

Tokens are used as a currency in the Prize Shop, which can be found mentioned above. They are normally obtained by participating in the Tournament. However, they can also be obtained by trading with other users or from Gragon's Gift. They currently serve no other purpose.