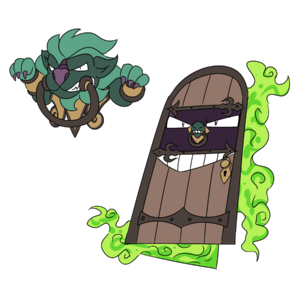 Drawn by Psychokin.
The Mocknock Line encompasses Mocknock and Portalgeist, which were released on the 5th of December 2020, and are Exclusive Pokémon.

Mocknock can be obtained by trading with other users, breeding with a parent of the Mocknock Line, or from the Tournament Shop.

Mocknock Eggs can be bought from the Tournament Shop using Tournament Tokens. After the first egg is purchased, additional eggs can be purchased for 80 Gold Poké. They currently cost 1

The Mocknock Line was one of 2 Exclusive Pokémon lines to be added in Season 18 of the Weekly Tournaments.

A green Egg with a dark green circle in the middle and two pale yellow spots. You feel uncomfortable around it.

It enjoys pulling pranks on Trainers by attaching to the front of doors. Three knocks with this Pokémon draws the attention of other spirits lurking nearby.

30
Total
303
Name origin: A combination of mock and knock.

After repeatedly summoning other spirits, it has gained the power to bridge directly to the realm of ghosts. It will wait in front of other doors to trick unsuspecting visitors into entering.

35
Total
496
Name origin: A combination of portal and poltergeist.