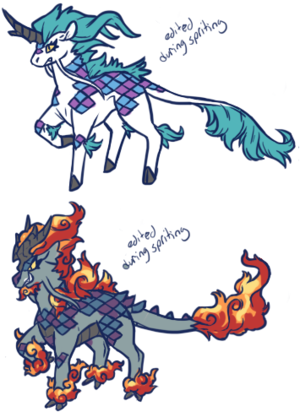 The Shinorin Line encompasses Shinorin and Incandescent Forme Shinorin, which were released on the 5th of September 2020, and are Exclusive Pokémon.

Shinorin Eggs can be bought from the Tournament Shop using Tournament Tokens. After the first egg is purchased, additional eggs can be purchased for 80 Gold Poké. They currently cost 1

The Shinorin Line was one of 2 Exclusive Pokémon lines to be added in Season 17 of the Weekly Tournaments.

A white Egg with a purple and blue diamond pattern on top. You feel fortunate when holding it.

It is said to appear at the birth or the passing of an illustrious Pokémon. After disasters, it would typically appear to spread its blessings and good fortune. One cataclysmic event, however, branded it as the cause and it hasn't been seen since.

Its once sleek and shiny scales have long since dulled. From rare sightings, it is said the flames on its back intimidates powerful Pokémon. Despite being labelled a traitor, it continues to try and be a benevolent force.