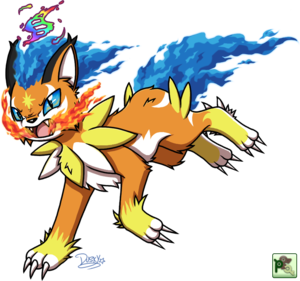 Solynx can be obtained by trading with other users, breeding with a parent of the Solynx Line, or from the Tournament Shop.

Solynx Eggs can be bought from the Tournament Shop using Tournament Tokens. After the first egg is purchased, additional eggs can be purchased for 80 Gold Poké. They currently cost 1

Solynx was one of 4 Exclusive Pokémon lines to be added in Season 3 of the Weekly Tournaments.

The Mega Solynx Q Exclusive was later distributed as part of the thirty-first Mass-Click Weekend of PokéFarm Q. Its Mega Stone was given as a reward to any individual user with at least 10,000 interactions during the event weekend.

An orange Egg with markings that resemble a sun and clouds. It's incredibly warm.

Solynx are known to wake early to watch the sun rise. They only follow Trainers that they deem worthy.

Mega Evolution boosts its power and, in turn, its ego. Its superiority complex is unrivaled and it often disobeys its Trainer.