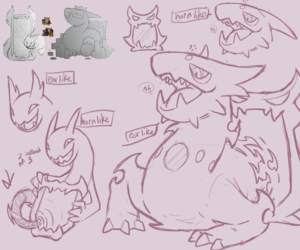 Concept Art in the upper left-hand corner drawn by Caydebug. The rest of the concept art is drawn by Novan-Chan.
The Mirrasma Line encompasses Mirrasma and Mirrarch, which were released on the 28th of May 2022, and are Exclusive Pokémon.

Mirrasma Eggs can be bought from the Tournament Shop using Tournament Tokens. After the first egg is purchased, additional eggs can be purchased for 80 Gold Poké. They currently cost 1

The Mirrasma Line was one of 2 Exclusive Pokémon lines to be added in Season 24 of the Weekly Tournaments.

A purple egg with metallic yellow spots. You feel uncomfortable around it.

As a covetous Pokémon, it jumps out at those that happen to pass by and scares them into dropping their valuables, which it then steals by storing them inside its mirror.

It lords over a group of Mirrasma, taking in their collected treasures and adding them to its body. The most decorated Mirrarch are often the most powerful. 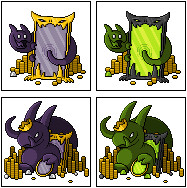