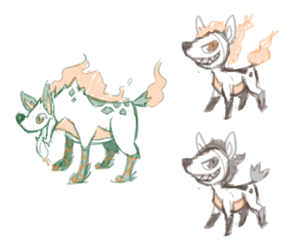 Drawn by Zio.
The Smokackle Line encompasses Smokackle and Hycano, which were released on the 5th of March 2022, and are Exclusive Pokémon.

Smokackle Eggs can be bought from the Tournament Shop using Tournament Tokens. After the first egg is purchased, additional eggs can be purchased for 120 Gold Poké. They currently cost 4

The Smokackle Line was one of 2 Exclusive Pokémon lines to be added in Season 23 of the Weekly Tournaments.

A grey Egg with dark red markings and a dark grey bottom. It's incredibly warm.

In order to make its flames stronger, it seeks out volcanoes and consumes the lava inside. Because of this, it also preys on Slugma.

Having eaten its fill, Hycano's veins are now filled with the magma it ate. The inside of the cracks on its skin offer a glimpse of molten rock coursing through the body.