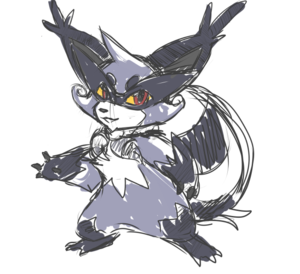 Bandicoon was released as part of the Tournament Top Prizes on the 18th of November 2017, and is an Exclusive Pokémon.

Bandicoon can be obtained by trading with other users, breeding with a Bandicoon, or from the Tournament Shop.

Bandicoon Eggs can be bought from the Tournament Shop using Tournament Tokens. After the first egg is purchased, additional eggs can be purchased for 80 Gold Poké. They currently cost 1

Ice Token to unlock. A Bandicoon egg can also be obtained by entering a certain cheat code.

Bandicoon was one of 4 Exclusive Pokémon lines to be added in Season 6 of the Weekly Tournaments.

A grey Egg with black and white markings. There's a strange vibe about it.

It keeps the valuables it steals in its sack-like tail. It will not, however, steal from anyone facing hardship.

113
Total
455
Name origin: A combination of bandit and raccoon.