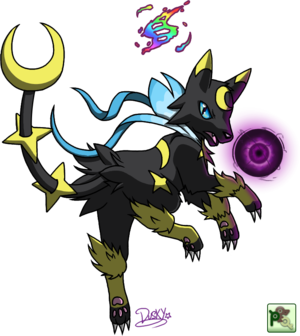 Mega Lunupine Q. Drawn by Dusky Peculiar.
Lunupine and Mega Lunupine were released as part of the Hallowe'en 2015 Event on the 3rd of November 2015, and are Exclusive Pokémon. Mega Lunupine was released in the form of a Mega Stone.

Lunupine can be obtained by trading with other users, breeding with a parent of the Lunupine Line, or from the Tournament Shop.

Lunupine Eggs can be bought from the Tournament Shop using Tournament Tokens. After the first egg is purchased, additional eggs can be purchased for 80 Gold Poké. They currently cost 1

The Hallowe'en 2015 Event[1] was experimental, to determine how to tweak the system for future similar events. The Event consisted of two distinct sub-events. During the early stage of the Event, users would occasionally have the screen darken, and a small "flashlight" effect be attached to their mouse's movement. Users then needed to locate a small silhouette shrouded in the darkness, and either mouse over it, or click it, in order to scare it away. After clicking on the silhouette enough, an animation played every time it was clicked, flashing the screen red and having the silhouette open its mouth as to attack. Following this, a debuff was applied to the user's account called "Bleeding," lasting ten minutes and causing all Interaction Points received to be decreased during the time limit. Eventually the silhouette stopped appearing altogether, and soon afterwards the Mass-Click Weekend was announced, which included a second target of 3,333 Interactions, with a mystery prize. Users who completed the 3,333 Interactions during the weekend received a certain item, which could be used to obtain a Lunupine egg. Its Mega Stone was given as a reward to any individual user with at least 12,345 interactions during the event weekend. The method for obtaining Lunupine from this Event is outlined above.

A black Egg with yellow marks that resemble a crescent moon. There's a strange vibe about it.

Lunupine let out melodic howls during the nights of a full moon. It is rarely seen out in the wild.

120
Total
462
Name origin: A combination of the Latin luna, meaning moon, and "lupine", derived from the Latin lupinus, meaning wolf.

Mega Evolution clouds its judgement[sic] and it perceives everything as a threat. It will lash out against anyone - long-time partners included.