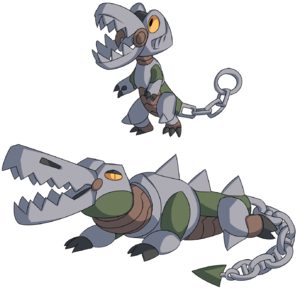 The Caimaw Line encompasses Caimaw and Caimangle, which were released on the 7th of March 2020, and are Exclusive Pokémon.

Caimaw Eggs can be bought from the Tournament Shop using Tournament Tokens. After the first egg is purchased, additional eggs can be purchased for 120 Gold Poké. They currently cost 4

The Caimaw Line was one of 2 Exclusive Pokémon lines to be added in Season 15 of the Weekly Tournaments.

A metallic Egg with a jagged pattern across the middle. The surface shines like steel.

It hides under fallen leaves while waiting for prey. The prey's attempts to flee are thwarted by Caimaw's tail ring clamping around tree roots.

The clamp of its jaw is so powerful that it's almost impossible to escape. It can wait for hours until the prey gets done struggling and hits the point of exhaustion.