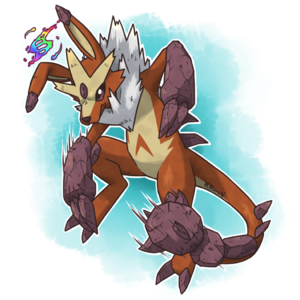 Boxaby Eggs can be bought from the Tournament Shop using Tournament Tokens. After the first egg is purchased, additional eggs can be purchased for 80 Gold Poké. They currently cost 1

The Boxaby Line was one of 4 Exclusive Pokémon lines to be added in Season 3 of the Weekly Tournaments.

The Mega Kangspar Q Exclusive was distributed as part of the fifty-sixth Mass-Click Weekend of PokéFarm Q. Its Mega Stone was given as a reward to any individual user with at least 10,000 interactions during the event weekend.

A dark brown Egg with a light brown patch and a white bottom. The shell is rough to the touch.

From birth, these Pokémon are constantly seeking out tough opponents to spar with. They use their tails to attack.

70
Total
350
Name origin: A combination of the words boxing and wallaby.

Kangspar only fight opponents that they feel are worth the effort. Their powerful tails and fast punches can crush the rocky exterior of a Graveler.

100
Total
515
Name origin: A combination of kangaroo and spar.

After Mega Evolution, it becomes incredibly violent. Some suspect this is due to the energy causing its arms to become fossilised.