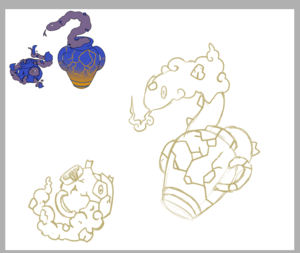 Concept Art in the upper left-hand corner drawn by DuchessLunaire. The rest of the concept art is drawn by Novan-Chan.
The Slithugi Line encompasses Slithugi and Sugikobra, which were released on the 4th of June 2022, and are Exclusive Pokémon.

Slithugi Eggs can be bought from the Tournament Shop using Tournament Tokens. After the first egg is purchased, additional eggs can be purchased for 160 Gold Poké. They currently cost 12

The Slithugi Line was one of 2 Exclusive Pokémon lines to be added in Season 24 of the Weekly Tournaments.

A deep blue egg with markings that look like cracks of purple. You feel uncomfortable around it.

It is said that this vengeful spirit came into existence when a noble died clutching a priceless piece of earthenware. Occasionally it wanders and can be heard crying about the state of its pot, but it never strays far.

Having been wronged in the past, this Pokémon's resentment may lead to seemingly random rampages. The amount of previously repaired cracks on its pot are often used as an indicator of its temperament.