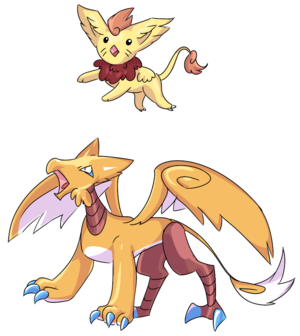 Drawn by Psychokin.
The Skyrie Line encompasses Skyrie and Grymphony, which were released on the 6th of June 2020, and are Exclusive Pokémon.

Skyrie Eggs can be bought from the Tournament Shop using Tournament Tokens. After the first egg is purchased, additional eggs can be purchased for 80 Gold Poké. They currently cost 1

The Skyrie Line was one of 2 Exclusive Pokémon lines to be added in Season 16 of the Weekly Tournaments.

A light blue egg with dark markings and a teal swirl on top. It's very light.

Its wings are not very strong yet, so it uses its oversized ears to glide on drafts of wind instead.

Each one has a unique song it teaches to its young. After returning from hunting abroad, it uses this song to locate its nest.