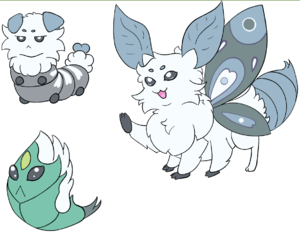 The Kitwurm Line encompasses Kitwurm, Purrpa, and Moffkat, which were released on the 7th of September 2019, and are Exclusive Pokémon.

Kitwurm can be obtained by trading with other users, breeding with a parent of the Kitwurm Line, or from the Tournament Shop.

Kitwurm Eggs can be bought from the Tournament Shop using Tournament Tokens. After the first egg is purchased, additional eggs can be purchased for 80 Gold Poké. They currently cost 1

The Kitwurm Line was one of 2 Exclusive Pokémon lines to be added in Season 13 of the Weekly Tournaments.

Note: If Kitwurm does not have the ready to evolve button then it needs a little more time to become unhappy. The reason is due to rounding, the Happiness percentage may show 0% even when the Pokémon has more Happiness.

A white Egg with blue spots. It's encased in a sticky film.

Though the species is known to live in swarms, each individual is often left to fend for itself.

Its mind is filled with constant buzzing and despondent emotions from gradually scattering memories.

Carefree and excitable, Moffkat has a very limited attention span. It is easily distracted by lights and movement.