The Holon Research Tower opened on the 28th of July 2017, alongside the release of Delta Species. It is necessary to obtain Delta Species and can be accessed from the Nearby Places tab on the Farm page.

An example of a Pokémon's Delta Record
All known species of Pokémon can be Delta Species of any of the 18 known Types and the Pokédex records what Delta-Types a user has obtained for each species.

It is possible for a Delta Species to be the Type it would be normally, resulting in the Pokémon being displayed as having the same Type twice. For instance, it is possible to have a Delta Pichu with Electric/Electric Typing. It is also possible for a Pokémon to lose one of their typings, for example: Cutiefly (Bug/Fairy) to become a single Bug Type.

Note: Account Locked eggs can not be a Delta Species.

Below are examples of the different Delta Species.

In order to obtain a Delta Species, one must first obtain

Holon Capacitor must be purchased for

There are two methods of obtaining Delta Points.

Note: Guests means that the user doesn’t have an account yet.

An example of the confirmation to trade-in a Shiny Noibat.
The second method is to trade-in Delta, Shiny, Albino, or Melanistic Pokémon. The number of Delta Points obtained is dependent on the Egg EXP of the Pokémon. Shinies are worth 4 times more than the base price of Deltas, Albinos are worth 6 times more, and Melanistics are worth 200 times more. 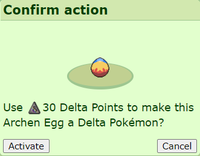 An example of the confirmation to use Delta Points.

Once enough Delta Points have been obtained, they can be redeemed to force an Egg in the user's Party to hatch as a Delta Species. What Type the resulting Delta Species will be is random, with a boosted chance of being the same Type as the current V~Wave. As with usual eggs, Delta Species Pokémon are able to hatch as Shiny/Albino/Melanistic variants. How many Delta Points required changes depending on the Egg being affected.

The Items tab allows a user to buy and redeem Delta Vouchers and buy Z-Fragments.

There are currently three types of Delta Vouchers.

Below the Delta Vouchers, a user may buy Z-Fragments for Delta Points. The Z-Fragment that is offered will match the current V~Wave and they cost

30 Delta Points each. Z-Fragments can be combined into a full [[Z-Crystals|Z-Crystal on the Albino Hunting page.