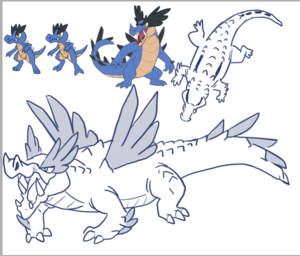 Drawn by Novan-chan.
The Inferial Line encompasses Inferial and Gargodyle, which were released on the 26th of February 2022, and are Exclusive Pokémon.

Inferial can be obtained by trading with other users, breeding with a parent of the Inferial Line, or from the Tournament Shop.

Inferial Eggs can be bought from the Tournament Shop using Tournament Tokens. After the first egg is purchased, additional eggs can be purchased for 80 Gold Poké. They currently cost 1

The Inferial Line was one of 2 Exclusive Pokémon lines to be added in Season 23 of the Weekly Tournaments.

Note: Using an Olive Pokéblock IV or higher will allow the Tough Stat to raise faster than the Sheen.

A blue Egg with a tan bottom and black crest-like markings. It's surrounded by an air of fierceness.

Because of its pitiful strength, Inferial is frequently looked down upon by trainers that want strong Pokémon. It will not stop until it feels powerful and confident.

Its sheer size exceeds that of most other Pokémon, and even its mere presence is known to strike fear into hearts. One should never underestimate Gargodyle's might.