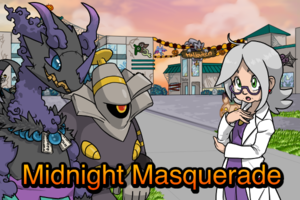 The Midnight Masquerade event was an Event that ran for two weeks in 2022, starting October 25th and ending November 7th.[1]During the event, users completed a list of tasks for Professor Holly, Professor Laurel, Sei, and Avaragon. At the conclusion of the event, the users received the

The user enter the Lab and finds Professor Holly talking about things that are happening. Prof. Holly hasn't realized that it is the end of October and explains that she and Professor Laurel were planning to have a costume party before asking the user to see if Prof. Laurel started on it. Upon arriving, Prof. Laurel is talking about new variants and hiring more helpers before stating he hasn't started anything and actually forgot about the party. A worried Sei asks if there isn't going to be a Hallowe'en party but excitedly offers to help when Prof. Laurel says there will be but it'll be difficult.

Sei sends the user to find some friends or strangers and meet at the Graveyard to start decorating. Sei exclaims, "With enough help it'll take no time at all!" After gathering helpers Sei is no where to be seen! Kryptik shows itself and the user explains what is going on. Sei arrives after getting into an argument with a hedge and winning. Sei cleans up and Kryptik wants to help as well.

Sei says it's time to find decorations. Afterwards, the user meets Prof. Holly in town. Things have been busy and the town is decorated thanks to all of the Farmers who were excited to help. Prof. Holly sends the user to the Fields to help Dusknoir and Avaragon. It takes a fair amount of guesswork but eventually the user understands Dusknoir and Avaragon are in a good mood thanks to the upcoming festivities. Avaragon wants to make a costume with the supplies that was gathered.

Prof. Laurel was worried the user would miss the party and the ghosts even came out to play. Prof.Laurel, Sei, Niet, and Avaragon are all grateful for the user's help. Avaragon put together an extra costume for the user's Pokémon. The