Professor Laurel is an NPC of Pokéfarm Q. He is a Pokémon Breeder, and runs the DayCare. 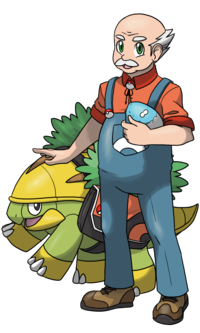 Professor Laurel.
Professor Laurel appears as an aging man of 56 years. He wears blue overalls with small Poké Ball fastenings over a red shirt, and brown boots. He has greying hair and a small moustache. He is often seen with his Grotle companion.

Laurel hails from Floaroma Town in the Sinnoh Region. As a Floaroman, he worked with the others in the Gardens, paying respect to Shaymin every day. However, unlike most of the others, he had a second job. It was his responsibility to breed strong and energetic Turtwig for the many Trainers who started their journey in Sinnoh.

After the Team Galactic incident, Laurel was overwhelmed with pride to discover that the hero who had brought the team down did so using a Torterra that Laurel had bred. Laurel decided then to go on his own journey, to expand his horizons and learn more about being a Pokémon Breeder. He chose one of his last Turtwig to be his partner, and left Floaroma.

After much studying, Laurel earned the qualification and title of Professor, marking him as one of the best Breeders in the world. He travelled with his now-evolved Grotle between DayCares to offer his help and advice.

Several years later, he heard of a Farm being founded on the mainland, some distance north of Kanto. He decided to travel to PokéFarm to see what was special about it, and was impressed with what he found. He offered his services as a Breeder, and set up his own DayCare on the Farm. He also patrolled the Farm with his Grotle to ensure everything was in order. After some time, he proposed to Professor Holly and the two married.

Professor Lauel's Grotle was the last Turtwig he bred before leaving on his journey. Turtwig and his siblings were bred for strength and energy, and this Pokémon was one of the best results. He evolved into Grotle around age 10, at which point he started offering to carry Laurel on his back. Since then he has served as transportation on the road, and he's happy to show off his strength to the Pokémon they pass by. Grotle refuses to evolve into Torterra, as that would make it harder to carry Laurel comfortably with everything that would be on his back. He'd be slower, too.

Prof. Laurel manages the DayCare and its functions. When visited, he can take care of up to two of a user's Pokémon. He will also hold onto any Eggs they may have produced.