Professor Holly is an NPC on PokéFarm Q. She is a Pokémon Scientist and the founder of PokéFarm. She runs the Lab. 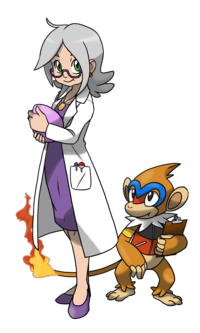 Professor Holly as she appears at the Lab.
Professor Holly is a woman of 57 years. She has greying hair, and wears a long lab coat over a lavender-coloured dress. She also wears black-rimmed glasses and has green eyes. She wears violet shoes and has a small gold-coloured necklace. She is commonly seen with her companion, Monny the Monferno.

Holly is very caring about Pokémon, finding pleasure in taking care of them. She is also shown to have been a very diligent student when studying to become a Pokémon Professor, and is dedicated to her work. Professor Holly enjoys encouraging people to interact with both Pokémon and people alike.

Ever since she was young, Holly enjoyed taking care of Pokémon. For most of her childhood, she dreamed of working in the Pokémon Centre in her hometown of Solaceon. Halfway through her studies, she worked on an internship. The work involved helping at the Pokémon Centre but also spending some time at the local DayCare. In both places, she found herself distracted by the wonders she found in the many Pokémon brought to her by their Trainers. Holly abandoned her classes to re-evaluate herself. She sought help from Pokémon Connoisseurs, without much luck. She spent some time as a Pokémon Trainer and even won a couple of Badges. However, it was a struggle.

One day, she challenged another Gym. She lost, however a Conoisseur approached her after the battle. As an S-Class Conoisseur, he was much better qualified to evaluate Holly. The verdict was that Holly was more interested in the new and undiscovered. Once she had been around the same thing too much, she would lose most of her interest in it. He advised her to study and train to be a Pokémon Professor.

Glad to finally have a solid verdict, Holly studied hard. It was with great pride that, several years later, she emerged as Professor Holly. Prof. Holly became an explorer, researching on the field and making vast contributions to the National PokéDex. As she aged, Prof. Holly went through a midlife crisis. She realised that she had spent so much time out and about studying Pokémon that she had basically forgotten to socialise with humans beyond work. She founded PokéFarm in an attempt to settle down and encourage others to do the same. Pokémon were great, but human interaction was still important. She wanted to ensure that others didn't forget that. Professor Laurel, who had come to work as a groundskeeper and to run a DayCare on PokéFarm, later asked for Holly's hand in marriage. She gladly accepted his proposal, and the two have been happily living together since.

Monny the Monferno
Chimchar was the first Pokémon that Holly hatched from an Egg. The two bonded quickly, and he was her prize Pokémon during her time as a Trainer.

He was very quick to evolve into Monferno under Holly's care, but he is reluctant to evolve further. He'd love to have the extra power and strength that evolution would bring, but he just doesn't like the idea of his head being on fire. He now works on the Farm, assisting Prof. Holly with her research.

When a user first joins PFQ, they are greeted by Prof. Holly. After her introduction, she allows the user to pick a Pokémon egg to start their farm. From then, she guides them with setting up their farm, getting Eggs, and clicking on others' Pokémon. She gives users tasks to complete to help them learn. As the tasks are completed, Prof. Holly unlocks more of the site and gives out the PokéDex, the Trainer Card, the Shelter Pass C, and the Farm Key. After all the tasks are completed, users are able to access all the major facilities on the site, and the Prof. sends them on their way.

Prof. Holly manages the Lab and its functions. When you visit there, she allows you to adopt Eggs and read biographies for other NPCs.