The PokéDex is a Key Item available to all farmers on PokéFarm Q. It is used to record and browse information on all the Pokémon a user has obtained. It is important to note that PokéFarm has its own unique listing of Pokémon that follows Pokémon family lines, not official national PokéDex orderings. For example, Bonsly, a Generation IV Pokémon, is listed before its Generation II evolution, Sudowoodo. 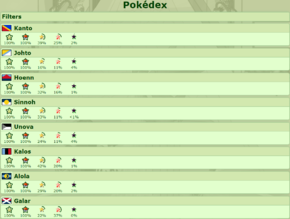 The main screen shows which regions can be selected to see 'Dexes for that Region.

Opening the PokéDex shows the following options/regions to look through:

The main screen also shows a user's completion progress for

Melanistic Pokémon of each section, as well as, the overall total completion of the PokéDex. When a user opens one of the options/regions they will find a list of Pokémon for that option/region along with the symbols representing Eggs, Pokémon, Shiny, Albino, and Melanistic. A greyed-out symbol means it has not been obtained, whereas, a lit-up symbol means it has been obtained. A greyed-out symbol with a percentage under it means that other formes still need to be obtained. 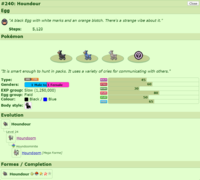 Viewing Houndour in the PokéDex

Viewing an entry for a Pokémon displays the following information:

On the bottom of the main screen, the

BFM, or Binary Forcefield Magnet, is purchasable for

100,000. It is a one-time use item that can erase the EggDex and PokéDex only, or the ShinyDex, AlbinoDex, and MelanDex as well.