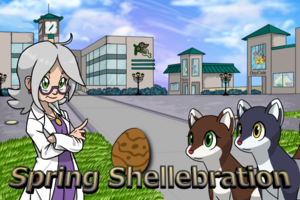 The Spring Shellebration event was an Event that ran for two weeks in 2019, starting on April 21st and ending May 5th. During the event, users completed a list of tasks relating to a storyline featuring a Pair of Orkit Twins.

The user arrives at a very messy and not so festive town where they are approached by Professor Holly. Professor Holly drags the user into her lab and explains that she has an adorable and very active problem. She asks the user to entertain a pair of Orkit Twins. After Professor Holly leaves, the Twins pounce and smother the user. Then the user is prompted to feed them some fishing bait to calm them.

The Twins are grateful and happy with the gift even though it appears to not be their favourite food. The user then thinks it would be a good idea to have a translator and waves down a nearby Niet. Niet translates that the Twins- Oli and Olivia- want to decorate and hide eggs but they need help. Niet tells the user to go see Ravyne for decorations. He then runs off to clean up a Sally tantrum mess before the festival can begin.

At Wishforge, Ravyne asks how he can help and the user explains that they need decorations. Ravyne then starts rambling about different decorations before Garthic tells Ravyne to slow down. After Ravyne calls Garthic a “meanyGarthic”, he explains about how he likes to “makepretty” Eggs with berries, Stardust, and Gems. The user is then prompted to find Stardust.

When the user brings the Stardust, Ravyne approves and gives the user the rest of the decorations. Ravyne then must've teleported the user back to Professor Holly's lab to keep a secret between him and Garthic. Oli and Olivia come in with a basket full of eggs that Professor Holly hopes doesn't contain Pokemon. A roar interrupts Professor Holly and Niet is heard yelling at Sally and Professor Holly excuses herself. Time to start decorating the Eggs. 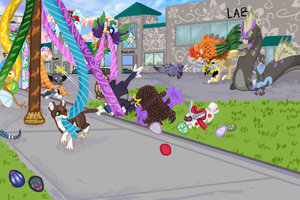 Novan walks in, notices the egg that the user decorated, and exclaims that it is so pretty! Novan then tells Professor Holly that the situation with Sally has been resolved, cleaned and that some consequences might happen due to Sally's Tantrum. Professor Holly says she'll get Alex and Wendy to start decorating. In comes the Orkit Twins who start talking to Novan while the user stands there confused. Novan apologizes and translates that Oli and Olivia love the Egg the user made and wants help to hide them. Novan tags along to translate for the user and says, “Imma be a helpful Novie.” The user then roams the Farm, scattering decorated eggs as you go.

While hiding eggs the user notices that the large egg feels warm. The egg then starts moving and in comes a raging mama Toxilisk. Novan gets frightened and states she'll take care of the egg while the user calms down the Toxilisk.

Novan speaks with the Toxilisk after the user calms her down. Novan explains that the Toxilisk apologizes for attacking without asking questions first. She's still upset but not mad. Novan had put the egg down against a tree where the Papa Toxitrice picked it up and seems to really like the colours on the egg. The user is then prompted to hatch the egg.

An unusual coloured Petripeep hatches from the egg. Back at the Lab, Professor Holly takes the family to do some research on the Petripeep. Novan notices Oli and Olivia is missing and wants to lure them out. The user is prompted to get some Nectar.

Professor Holly suggests trying to lure the Orkit Twins near the beach. Professor Holly also believes that the Petripeep is an unexpected outcome from Sally's tantrum. “Did you mean, Uneggspected?” Novan jokes before heading off to find the Twins. The user is prompted to Search the beach.

The Okit Twins are found after some searching. Novan translates that the Toxilisk had scared them off when she attacked the user. They all go back to town so Oli and Olivia can meet Petripeep and join the festival. The town is now fully decorated and colourful. Novan notices that Doug has a Nectar stand and runs off. Garthic appears to tell the user they did a great job and that Petripeep was really eager to see the user again. The family proposes for the user to take care of Petripeep since they know it will gain unwanted attention and that the user is strong enough to take care of it. Petripeep joins the user's Farm!