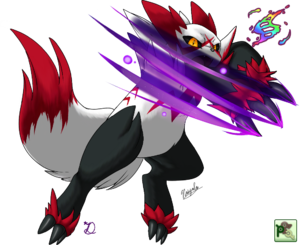 Drawn by Naiyala and Fujin Yumi.
Mega Zangoose Q is an Exclusive Pokémon released as part of the tenth Mass-Click Weekend. It was released on the 1st June 2015 and was released in the form of a Mega Stone.

The Mega Zangoose Q Exclusive was distributed as part of the tenth Mass-Click Weekend of PokéFarm Q. Its Mega Stone was given as a reward to any individual user with at least 10,000 interactions during the event weekend with 50% chance. Users who got at least 40,000 interactions got both Zangoosite Q and Sevipernite Q.

The Zangoosite Q was also the eleventh Mega Stone released as part of the Mega Lookback event on 5 June 2017. The special code could be retrieved from the PokéFarm Twitter or Facebook pages from 5 June 2017 to 31 January 2018.

Mega Evolution feeds upon its hatred for Seviper and fuels it to fight with unbridled aggression.