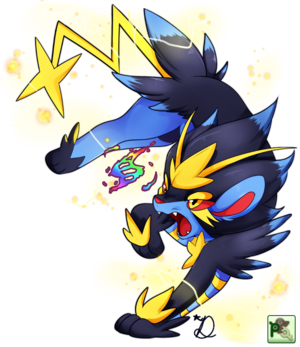 Drawn by Fujin Yumi.
Mega Luxray Q is an Exclusive Pokémon released as part of the sixth Mass-Click Weekend. It was released on the 9th of February 2015 in the form of a Mega Stone.

The Mega Luxray Q event was the sixth Mass-Click Weekend held on PokéFarm Q, and the first complete event of the 2015 year. It was released as a reward from achieving 10,000 interactions.

The Luxraynite Q was also the seventh Mega Stone released as part of the Mega Lookback event on the 8th of May 2017. The special code could be retrieved from the PokéFarm Twitter or Facebook pages from the 8th of May 2017 to the 31st of January 2018.

Upon Mega Evolution, it embraces its darker side. It becomes more aggressive in pursuit of foes and won't hesitate to unleash a powerful Discharge - not caring who is hurt in the process.