Difference between revisions of "Shelter"

The Shelter page with some upgrades.

On the right side of the page, information about the current day in relation to the shelter is displayed. From top to bottom, they are: 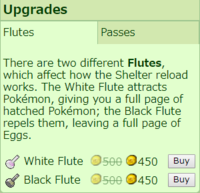 There are several Shelter Upgrades available for

Shelter Passes allows users to adopt Pokémon and Eggs from the Shelter. There are currently six levels: C, B, A, S, X and ★. A Shelter Pass C is given to the user after completing the tutorial and each further level grants more adoptions per day. Only the next highest pass can be purchased from the Shelter. However, any pass can be purchased from other players on the Market Board.

Only the highest pass counts for adoptions. The amount of adoptions does not stack when owning multiple passes.

Black Flute repels Pokémon, causing the next shelter page to contain only eggs, and the

White Flute attracts Pokémon, causing the next shelter page to contain only hatched Pokémon. Both Flutes can be purchased for

500 each. Additional flutes may be purchased, but do not provide extra bonuses.

When chaining a Pokémon, a hidden Shelter boost applies. Each time users reload the shelter, there is a small chance that one of the eggs is replaced with an egg that they're hunting, if it exists. This boost starts at chain 1 and caps at chain 100, with a boost of 25%.