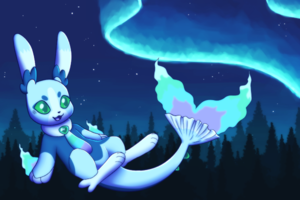 Mega Bunbori. Drawn by Lunamancy.
Bunbori was released as part of the Tournament Top Prizes on the 18th of February 2017, and is an Exclusive Pokémon.

Bunbori Eggs can be bought from the Tournament Shop using Tournament Tokens. After the first egg is purchased, additional eggs can be purchased for 80 Gold Poké. They currently cost 1

Note: Bunbori is listed in the Undiscovered Egg Group, and therefore cannot be obtained by breeding.

Bunbori was one of 4 Exclusive Pokémon lines to be added in Season 3 of Weekly Tournaments. The Bunborite Q Megastone was distributed as part of the 12 Days of Christmas 2018 event. It was given as a reward to any individual user who reached the Day 12 goal in the event. A Borealis Lantern was distributed to players who got 10,000 Interactions or more on Mass-Click Weekend 63. The Borealis Lantern was used to summon Bunbori and to obtain a Bunbori egg.

A blue Egg with a light pink patch in the middle. It radiates a colourful aura on dark nights.

This Pokémon is rarely seen. A colourful aura trails in its wake. It is considered a blessing to be witnessed.

100
Total
600
Name origin: Combination of the words bunny and Borealis.

Rumoured only to be a mirage visible under Aurora Borealis, Mega Evolution lets Bunbori illuminate the entire night sky.