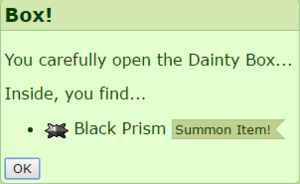 To use a Summon Item users must visit the Summons page which is located in the "Other Links" section of the Farm page. The first tab gives a brief explanation on Summons and lists the Summon Items of the user. Hovering over them tells the user which Legendary Pokémon can be summoned by the Summon Item. Clicking a Summon Item gives the user a confirmation window to summon the Pokémon. If there is an open spot in the Party then the Egg appears, in case of a full party an error message appears and the process gets canceled. After summoning the Legendary Pokémon the page has to be reloaded for it to count to the unlocks.

Each region's progress box has a Find missing entries link that will provide information about what PokéDex or EggDex entries a user is missing for that region.