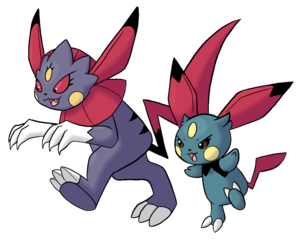 Drawn by Eggy and Caydebug.
The Snichu Line encompasses Snichu and Vilechu, which were released as part of the ninetieth Mass-Click Weekend on the 2nd of May 2022 and are Exclusive Pokémon.

Snichu was distributed as part of the ninetieth Mass-Click Weekend on PokéFarm Q. Its egg was given as a reward to any individual user with at least 10,000 interactions during the event weekend.

A deep blue Egg with black markings and a yellow spot in the middle. There's a strange vibe about it.

Unlike Pichu, this Pokémon can handle and control electricity very well. However, its preferred use of this power is to cause trouble for others.

A Vilechu's coldness typically knows no bounds; most individuals only care about themselves and vehemently dislike those that are selfless and kind-hearted. Their claws are known to deliver a powerful electric shock upon striking.