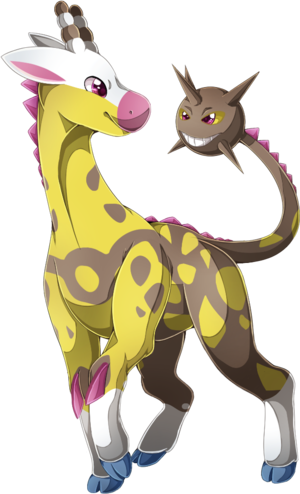 Drawn by Sugar Luck.
Mega Girafarig Q is an Exclusive Pokémon released as part of the forty-first Mass-Click Weekend. It was released on the 26th February 2018 and was released in the form of a Mega Stone.

The Mega Girafarig Q Exclusive was distributed as part of the forty-first Mass-Click Weekend of PokéFarm Q. Its Mega Stone was given as a reward to any individual user with at least 10,000 interactions during the event weekend.

Its secondary head becomes more intelligent thanks to Mega Evolution. It is capable of acting independently and may even fight for dominance.