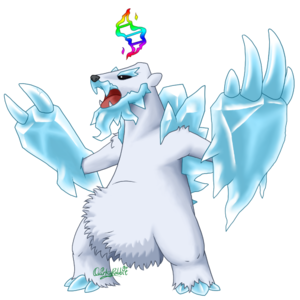 Drawn by QuirkyRabbit
Mega Beartic Q is an Exclusive Pokémon released as part of the nighty-second Mass-Click Weekend. It was released on the 27th of June 2022, in the form of a Mega Stone.

The Mega Beartic Q Exclusive was distributed as part of the ninety-second Mass-Click Weekend of PokéFarm Q. Its Mega Stone was given as a reward to any individual user with at least 10,000 interactions during the event weekend.

"Its forearms are made of solid ice. It is permanently surrounded by an aura of frigid air so powerful that ice crystallises uncontrollably all over its body."