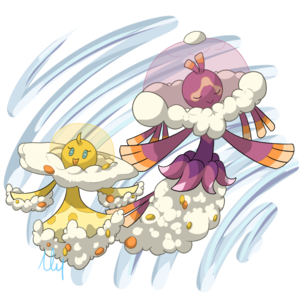 Drawn by AlyssaNights.
The Bubbly Line encompasses Bubbly Frillish and Bubbly Jellicent, which were released as part of the ninety-third Mass-Click Weekend on the 1st of August 2022 and are Exclusive Pokémon.

Bubbly Frillish can be obtained by trading with other users or by breeding with a parent of the Bubbly Line.

Bubbly Frillish was distributed as part of the ninety-third Mass-Click Weekend on PokéFarm Q. Its egg was given as a reward to any individual user with at least 10,000 interactions during the event weekend.

A yellow Egg with orange splotches that occasionally switch around. It often levitates.

It enjoys floating near the surface of the ocean where it can absorb sunshine. Its veil-like arms and underside are often used by other, smaller aquatic Pokémon as cover from danger.

The sunlight it absorbed gave it the ability to emit a calming glow while floating in the deepest parts of the ocean. A rare sight, its kind was once mistaken for wandering spirits from sunken ships.