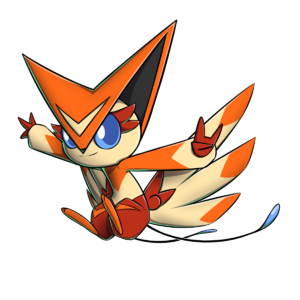 Drawn by ICEBUNN
Mega Victini Q is an Exclusive Pokémon released as part of the eighty-sixth Mass-Click Weekend. It was released on the 3rd of January 2022, in the form of a Mega Stone.

The Mega Victini Q Exclusive was distributed as part of the eighty-sixth Mass-Click Weekend of PokéFarm Q. Its Mega Stone was given as a reward to any individual user with at least 10,000 interactions during the event weekend.

"Its power has been amplified by Mega Evolution to the point of making it reckless and dangerous. Mega Victini's attacks are capable of scorching everything around it, including its own trainer."