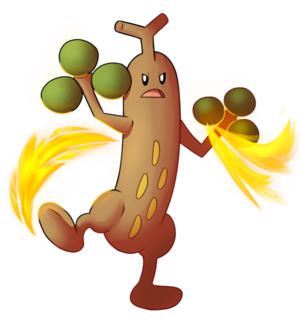 Drawn by DuchessLunaire
Totem Sudowoodo Q is an Exclusive Pokémon released as part of the eighty-eighth Mass-Click Weekend. It was released on the 28th of February 2022, in the form of a Super Totem Sticker.

The Totem Sudowoodo Q Exclusive was distributed as part of the eighty-eighth Mass-Click Weekend of PokéFarm Q. Its Super Totem Sticker, along with a Mega Stone Voucher 5, was given as a reward to any individual user with at least 10,000 interactions during the event weekend.

To avoid being attacked, it does nothing but mimic a tree. It hates water and flees from rain.