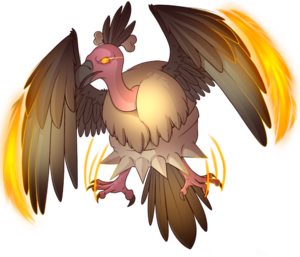 Drawn by DuchessLunaire.
Totem Mandibuzz Q is an Exclusive Pokémon released as part of the seventy-third Mass-Click Weekend. It was released on the 30th of November 2020, in the form of a Super Totem Sticker.

The Totem Mandibuzz Q Exclusive was distributed as part of the seventy-third Mass-Click Weekend of PokéFarm Q. Its Super Totem Sticker, along with a Mega Stone Voucher 5, was given as a reward to any individual user with at least 10,000 interactions during the event weekend.

"Watching from the sky, they swoop to strike weakened Pokémon on the ground. They decorate themselves with bones."