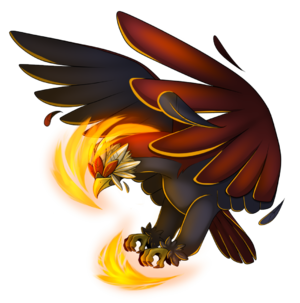 Drawn by DuchessLunaire.
Totem Braviary Q is an Exclusive Pokémon released as part of the sixty-first Mass-Click Weekend. It was released on the 2nd of November 2019, in the form of a Super Totem Sticker.

The Totem Braviary Q Exclusive was distributed as part of the sixty-first Mass-Click Weekend of PokéFarm Q. Its Super Totem Sticker was given as a reward to any individual user with at least 10,000 interactions during the event weekend.

The more scars they have, the more respect these brave soldiers of the sky get from their peers.