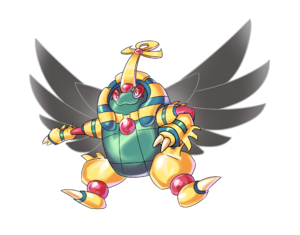 Drawn by Psychokin.
Scaracross is an Exclusive Pokémon which was released as part of the sixtieth Mass-Click Weekend on the 4th of November 2019.

Scaracross can be obtained by trading with other users, by breeding with a Scaracross parent, or by breeding a male of the Yamask line with a female Heracross. Both Unovan and Galarian Yamask will work.

Scaracross was distributed as part of the sixtieth Mass-Click Weekend on PokéFarm Q. Its egg was given as a reward to any individual user with at least 10,000 interactions during the event weekend.

A black Egg with blue and gold markings. You feel uncomfortable around it.

It grants its Trainer a sense of tranquility. However, if mistreated or stolen, it places a deadly curse on the offender.