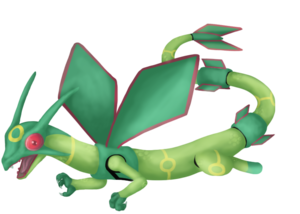 Drawn by Bananalizard.
Ryukuza is an Exclusive Pokémon which was released as part of the fifty-fourth Mass-Click Weekend on the 29th of April 2019.

Ryukuza can be obtained by breeding with a Ryukuza parent, or by breeding a Rayquaza with a member of the Trapinch line.

Ryukuza was distributed as part of the fifty-fourth Mass-Click Weekend on PokéFarm Q. Its egg was given as a reward to any individual user with at least 10,000 interactions during the event weekend.

A light green Egg with a yellow marking in the middle. It is constantly surrounded by a strong wind.

It hides itself by whipping up powerful tornadoes, leaving massive destruction in its wake.