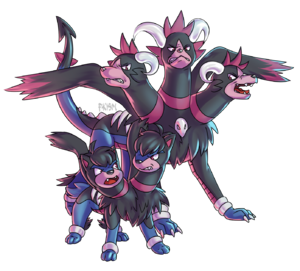 The Orthrus Line encompasses Orthrus Houndour and Cerberus Houndoom, which were released as part of the fifty first Mass-Click Weekend on the 4th of February 2019, and are Exclusive Pokémon. They are multi-headed versions of Houndour and Houndoom, with colours and design elements taken from Zweilous and Hydreigon.

Orthrus Houndour can be obtained by trading with other users or by breeding a female of the Houndour line with a male of the Deino line. The vanilla method of breeding with an Orthrus/Cerberus parent also works.

The Orthrus Line Exclusives were distributed as part of the fifty-first Mass-Click Weekend on Pokéfarm Q. Its egg was given as a reward to any individual user with at least 10,000 interactions during the event weekend.

A blue Egg with a black top and pink markings. It's surrounded by an air of fierceness.

While the two heads often have trouble getting along, they cooperate phenomenally when under stress.

60
Total
360
Name origin: Based off of the Orthrus, a two-headed dog from Greek mythology.

The centre head is dominant. They have been known to make excellent guard dogs.

98
Total
565
Name origin: Based off of the Cerberus, a tri-headed dog from Greek mythology.