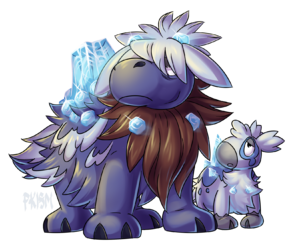 Drawn by Psychokin.
The Arctic Line encompasses Arctic Numel and Arctic Camerupt, which were released as part of the sixty-sixth Mass-Click Weekend on the 4th of May 2020 and are Exclusive Pokémon.

Arctic Numel was distributed as part of the sixty-sixth Mass-Click Weekend on PokéFarm Q. Its egg was given as a reward to any individual user with at least 10,000 interactions during the event weekend.

A pale blue egg with a dark blue pattern on the top. It's oddly cold.

As a result of the magma inside this pokemon having long since cooled and adapting to develop ice instead, their frost breath can reach temperatures of -70 degrees celsius. They're extremely docile and trusting of humans.

Although slow moving, spotting this pokemon in icy wastelands is considered a blessing. Its dense fur is incredibly warm despite the glacier resting upon its back