Shiny Hunting refers to the act of attempting to hatch a specific Shiny Pokémon by hatching the same type of Egg repeatedly. There is an extremely small chance of hatching a Shiny Pokémon without the use of any Boosts or the PokéRadar.

About the Shiny Hunting Page 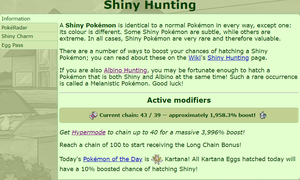 The Information tab explains what Shiny and Melanistic Pokémon are. Below is the Active Modifiers section. The progress bar is a user's Current chain. In the example picture, the user is currently hunting Noibat which is indicated by the mini-sprite. Their current chain is 42/38 the 42 is how many eggs have been hatched in their chain. While the 38 is representing the shiny bonus level which is approximately 1,276.8%.

Below the progress bar explains that having Hypermode can give a user a higher boost. It also explains that reaching a chain of 100 will allow a user to start receiving the Long Chain Bonus.

These factors apply to all users without exception. These boosts are the Pokémon of the Day and Sei's Bonus Counter. The PotD selects a random Pokémon that has a 10% improved chance of hatching Shiny for the day. Sei's Bonus Counter gets activated after a certain amount of Shiny Pokémon are hatched site-wide (3,777) and boosts the chance of hatching a Shiny overall for one day.

Note: While Sei's counter is influenced by the activity of the users, the PotD is completely random.

A user can raise their chance of hatching a Shiny Pokémon. These boosts stack with the site-related boosts and with each other.

After the rate adjustment on the 28th of August 2019, the chances of hatching a Shiny and Albino Pokémon were switched, resulting in Shiny Pokémon becoming less common when using boosts than Albino Pokémon.

can be purchased for

750,000 on the Shiny Hunt page. It allows users to chain eggs of the same species and significantly boosts a user's Shiny hatching chances. When a user chains at least 39 eggs, the maximum boost is 1,958%. Together with Hypermode, the maximum boost of 3,996% will be granted after the user has chained at least 40 eggs.

boost the chance of hatching a Shiny Pokémon for 24 hours after activation by 2.5 times. A Shiny Charm can be purchased for

100 and takes 5 days, while recharging multiple Shiny Charms at once lowers the cost (per charm- up to 80%) and the duration down to 24 hours.[1]

Users have the option to be reminded to use a new Shiny Charm each day. Unchecking the option will ensure that the user is not notified.

Below is a chart for recharging multiple Shiny Charms at once.

It is possible to recharge more than 17 Shiny Charms at once, with every further Shiny Charm costing an additional

A chain comprises of a set of at least 3 consecutive Eggs hatched of the same species. A chain is only possible with an active Hypermode or after having bought a PokéRadar. Hatching the same Egg raises the chance of getting a Shiny Pokémon, the boost depends on how many eggs were hatched and if Hypermode is in use. A Shiny Pokémon that is hatched in a chain will have an entry in their Timeline that can look like this:

This means that this Shiny Pokémon was the 4th one to hatch in this chain and hatched at Egg 86. Active boosts when hatching were the Sei Bonus Counter and a Shiny Charm

. The Timeline only lists boosts that raise the chance of hatching a Shiny Pokémon; boosts that made it easier to hatch due to more Interaction gain, like the PokéRus, are not listed.

Breaking a chain means losing all progress made in the chain. This is usually done when starting a new Shiny Hunt. The chain will either fail completely or start at 1 Egg again, depending on whether the user still owns the PokéRadar or not. The following causes a chain to break:

Note: Eggs won as a Top Prize in the Weekly Tournament or as a prize from Mass-Click Weekend will not break Shiny Hunt chains.

When a user tries to hatch an egg that is not a part of their chain a warning pop-up will appear. This pop-up will let the user know that the egg is different from their chain along with giving them options to either break the chain or use an Egg Pass. If the user does not own any Egg Passes, they will be redirected to the page where they can buy them.

allows users to save their current chain. After using a PR Memory Stick, it will reset the user's PokéRadar allowing them to hatch other eggs without having to worry about breaking their chain. The saved chain can then be resumed at any time (overwriting any existing chain at that time). Each PR Memory Stick

can only be used once and they can be purchased for

Note: One-time use only means users need to buy a new PR Stick to save any hunt, even if it was a hunt that was previously saved and reactivated.

When chaining a Pokémon, a hidden Shelter boost applies. Starting from chain 1, each time the user reloads the shelter, there is a small chance that one of the eggs on their screen will be replaced with an egg that they're chaining if it exists in the Shelter. This chance caps at 25% at chain 100.

Note: The counter starts when the egg is created, not when it is adopted.