Difference between revisions of "Fishing Hut"

The Fishing Hut is one of the places on PokéFarm a user can visit. It is used to catch various aquatic Pokémon. It can be accessed from the Nearby Places tab on the Farm page.

Before the user is able to catch any Pokémon, an Old Rod

has to be bought from the Fishing Hut. After purchasing one for the first time, the user receives 20x Fishing Poké Balls

for free. More Fishing Supplies can be purchased later with Credits.

Once equipped with a rod and supplies, a Fishing Zone must be picked. The River is available by default, but more areas can be unlocked later.

How the River Fishing Zone looks on PFQ.

A very short amount of time is required to wait before the action button shakes and is accompanied with the phrase "Something bites!". Clicking the button then will result in a battle. Clicking the button too early returns the Bait and exits back to the spot selection screen. Not reeling in the fish on time will cause the message: "It got away... You lost your bait."

It is possible sometimes to fail to catch anything. Failing is indicated by a specific message: "Nothing seems to be biting. The fish are nervous; try another spot." This message will continue to display until a new spot is selected.

During and After Battles 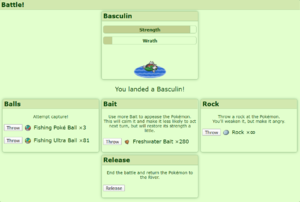 How a Battle appears.
When a battle is initiated, the hooked Pokémon will be displayed, along with two meters.

The "Strength" meter indicates how likely the Pokémon is to be caught. The higher the meter, the less likely. Player actions can decrease the meter, but if the meter runs out completely, the Pokémon will flee.

The "Wrath" meter indicates how likely the Pokémon is to run away. The higher the meter, the more likely.

While in battle, four options are available:

After successfully catching a wild Pokémon, the player can continue fishing in the same area, or return to the Fishing Hut. Captured Pokémon may be added to the user's farm or be released to the shelter in the Hut.

On rare occasions, the hooked Pokémon can be a Shiny Pokémon. The exact odds of this occurring are unknown. When this happens, the sprite displayed will be the shiny sprite, and a

symbol will be next to the Pokémon's name. Battles with Shiny Pokémon play out exactly the same as normal battles.

Fishing Gear consists of Bait and Poké Balls. They are necessary for successful fishing sessions.

New and better Rods may be purchased after catching a number of Pokémon via fishing.

These are all the Pokémon that appear when fishing, along with which zone they appear in and what rod must be used.