Difference between revisions of "Evolution"

Pokémon Evolution on PokéFarm Q is similar to the type of evolution seen in the canon games. Following this concept, Pokémon on PokéFarm Q are able to permanently evolve into new and different species if specific requirements and conditions are met. 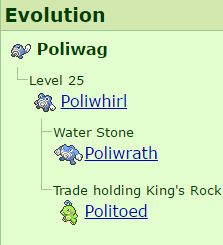 Evolution is a permanent, irreversible, process in which a Pokémon transforms and becomes a new Pokémon. Most Pokémon, excluding Legendary (Cosmog, Type: Null, Poipole, and Kubfu are exceptions) and Single Stage Pokémon, are able to evolve into higher Stages (forms) of themselves. Evolving a Pokémon changes its species, and therefore also changes any attributes that it could have previously held, these attributes may include: type, egg group, field tolerance, colour, and physical appearance. Remember, evolution is permanent and cannot be undone.

Note: Pokémon will retain the shiny, albino, or melanistic status after evolving.

All Pokémon that are capable of evolution have unique and specific requirements that must be met before they are able to evolve. Specific evolutionary information and criteria can be found on the user's PokéDex, provided they have the desired Pokémon's Dex Entry. Listed below, are the most common evolution requirements. More than one criteria may be required for certain evolutions.

Most Pokémon become able to evolve once they reach a certain level. A Pokémon does not have to be at this exact level to evolve, but must have at least reached this level to do so, i.e., Pokémon are able to evolve at any level after they met their evolutionary requirement.

An example of an evolution prompt shown on a Pokémon's summary.

Some Items are capable of triggering evolution for certain Pokémon. The most commonly used evolutionary items are: Evolution Items, Evolution Stones, and Special Evolution Items, but other items may be used as well. A Pokémon that requires an item to evolve must be holding the item it needs before evolution is possible. An item that is needed for evolution is consumed and disappears from the Pokémon's Summary Page after evolution occurs.

Certain Pokémon must reach a high level of happiness before they are able to evolve. Pokémon which evolve by this method must have a Happiness Level of 220 or greater. A Pokémon's happiness can be raised by placing it in a preferred field or by feeding it Consumables.

There are currently 2 Pokémon that evolve from having 0 Happiness (also known as Unhappiness). Due to rounding, the Happiness percentage may show 0% even when the Pokémon has more Happiness.

Similar to how some Pokémon in canon games needed to be traded in order to evolve, Pokémon on PFQ must also be traded to evolve. Many Pokémon do not require further conditions to be met (they can evolve simply by being traded), but others must be holding specific items to trigger evolution. Gifting counts as trading and is able to trigger evolution.

A selected few Pokémon must meet even more specific requirements to evolve. These further requirements often include: being of a certain gender, the time of day being either day or night, specific party or field arrangements, or other specific conditions that are unique to a species. These requirements are often paired with other evolutionary requirements, in which case, both requirements must be met to induce evolution. 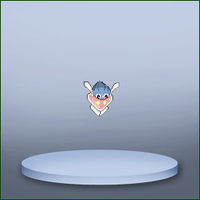 Inkay's Evolving via rotated upside-down using Dress Up at Level 30.

When a Pokémon is required to be near X Pokémon, the X Pokémon has to be in its base form and not in any other form.

Example of a Pikachu near a Tapu Koko.

What it looks like having Max Beauty. The word Max should be below the word Beauty. 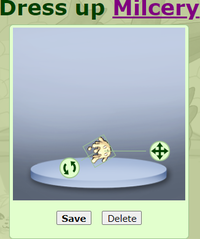 Example of a Milcery being spun in the Dress Up Page.

There are Pokémon whose evolutions have multiple formes. For these Pokémon, a specific set of conditions must be met to achieve a specific forme. Some of these conditions cannot be changed.

A female Burmy will evolve into a Wormadam of the same cloak. Burmy's cloak can be changed by sending it on a Scour Mission: the Forest Area will yield a Plant Cloak, the Desert will yield a Sandy Cloak, and the City will yield a Trash Cloak. Once evolved, Wormadam's cloak is permanent.

Tyrogue's and Caprikid's evolutions are based on its Battle Stats.

Note: The final stats are used to determine the evolution of these Pokémon.

The wing pattern that Vivillon will have when it evolves from Spewpa depends on the particular user that hatches it. Each user is randomly assigned a Vivillon pattern that cannot be changed.

Note: This means that every Spewpa that a user evolves will have the same pattern as the person who hatched it. Parents of the Scatterbug Egg have no influence on the Vivillon pattern.

Cosmoem evolves into Solgaleo or Lunala depending on its gender and time of day. For Solgaleo, it has to be a male and Daytime. For Lunala, it has to be a female and Nighttime. This information can also be found in the PokéDex.

Note: The time of day is based on Server Time.

Toxel will evolve into a Toxtricity forme that is based on its nature:

Alcremie's evolution method follows the Consumable Sweet Item given to it and the direction a user spins it using the Dress Up on the Pokémon's Summary page. Any Sweet + Directional guide below results in the proper Alcremie.

The Everstone is an item directly related to the concept of Evolution. Once being held by a Pokémon, it stops a Pokémon's ability to evolve even if all its evolutionary requirements have been met. It is not necessary to use an Everstone to prevent evolution, as Pokémon do not evolve automatically on PokéFarm. However, using an Everstone can reduce the chance of a user accidentally evolving their own Pokémon, and also removes the Pokémon from the list of Pokémon ready to evolve on the Farm page.