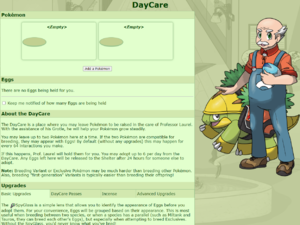 Breeding is considered the main usage of the DayCare, and occurs when two compatible Pokémon are left in the DayCare. Breeding two Pokémon can produce an Egg that belongs to the same evolutionary chain as either parent, rather than just the mother. Depending on the level of compatibility of the two Pokémon, there is a chance that an Egg may be produced each time the user completes 64 Interactions.

If two Pokémon that are left in the DayCare are in different Egg Groups, the Undiscovered Group, or are the same gender/genderless, a message will appear beneath the two stating, "The Pokémon are not compatible for breeding."
The only exceptions are:

The compatibility of two Pokémon is based on multiple factors, including their: Original Trainer, lineage, level, and happiness. Higher compatibility is achievable if both of the Pokémon are from two different users and family trees. The amount of eggs produced is also affected by the level gap between the Pokémon. The two Pokémon must be different genders to have a chance of producing eggs, except for Ditto and Unown. Considering this, Pokémon of the same species are more compatible with breeding with each other than with Pokémon of different species. The sentence beneath the two Pokémon in the DayCare gives a hint about how compatible they are as a breeding couple. To get an exact percentage of a couple's breeding compatibility, the

Matchup Checker upgrade has to be purchased.

Matchup Checker will show "(!) This couple may produce something unexpected!" This message indicates that the two Pokémon could produce a different type of Pokémon. This message will appear when breeding Unown and the parent species of the PFQ variant or regional variant Pokémon. However, this message will not appear if one of the breeding pair is a variant Pokémon since it wouldn't be unexpected to get the variant egg. For example, breeding a female Rattata with a male Primeape would make this message appear because it could result in a Saiyan Rattata egg but breeding a Saiyan Rattata with a Rattata would not make this message appear.

As of the 4th of February 2021, a full breakdown of modifiers was added to the

Matchup Checker. These modifiers allow a user to see exactly what is contributing to the breeding percentage being higher or lower than the Base Percent. It also includes how many interactions are needed for the next breeding chance.

Note: Exclusives and variants have a lowered breeding rate than a normal Pokémon which makes them harder to breed.

Variant Pokémon will produce Eggs of their own species, as well as, Eggs of their parent species, e.g. members of the Early Bird Line can produce both Early Bird Natu Eggs and normal Natu Eggs. There is a 1 in 8 max chance that an Egg that is produced will be a Variant Species, which means, a variant breeding pair will produce more normal eggs than variant eggs.

When breeding Pokémon, the eggs will inherit 3 random IV stats of its parents. Users can not manipulate what stat will be inherited.

Destiny Knot to hold. The amount of inherited IVs will increase up to a maximum of 5 stats with the 6th stat being random.

Master Badges influences IVs by preventing the low numbers from generating in the IV. Depending on the class, this IV boost will raise the lowest IV number, making the pool of numbers smaller. This IV bonus applies to the randomised IVs. If a user is using a Destiny Knot then the IV bonus will apply to the 6th stat.

Note: IV breeding is not 100% consistent and can result in no IVs being passed down. This is a known "inconsistent bug".

Note: A maximum of 5 IVs are inherited, the 6th will be random.