Alexandra, more commonly referred to as Alex, is an NPC who first appeared during Spirits Unchained 2017, but she later opened a Salon in the Contest Hall where she now grooms Furfrou in exchange for Salon Vouchers. 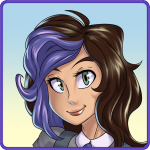 Alex runs the Salon. When visited, her service includes grooming Furfrou or Pasovan into nine different trims for the price of a Salon Voucher, which can be purchased from the Prize Shop at various prices. Furthermore, she can train Kecleon to take on colours decided by the user. Initial training costs