Difference between revisions of "Albino Hunting" 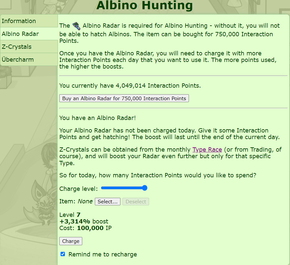 The maximum level is 7, which gives a maximum boost of +3,314% when paying the maximum amount of Interaction Points, which is 100,000.

The Albino Radar is uncharged and does not have a level when it is first purchased. Charging it with the corresponding amount of interaction points charges the Albino Radar to a certain level.

The most important boost is provided by the Albino Radar, the only other known way of boosting Albino chances is by using Z-Crystals matching the desired Pokémon's type, obtained in the monthly Type Race.

The following table shows the boost that the Albino Radar provides depending on the level that it is charged to. Higher levels provide a greater boost, but will also cost more Interaction Points.

Z-Crystals are obtained from the Type Race. When used, they boost Albino chances of the corresponding Type by 50% for 3 days. This stacks with the Albino Radar, thus, it is advisable to only use Z-Crystals when the radar is at its maximum level.

Using a Z-Crystal is done on the Z-Crystal tab of the Albino Hunting page. Seven Z-Fragments can also be exchanged for a full Z-Crystal in this tab.