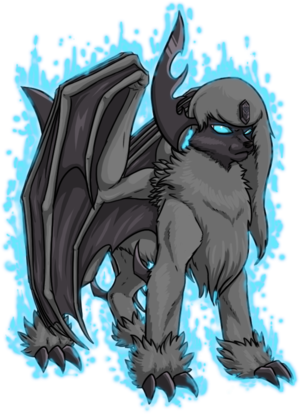 Zophan is a liquid substance located within Zophan Canisters. It is a limited resource that originates from Niet's home dimension, the Dark World. Beyond this, it has no other influence upon the game's mechanics.

Not to be confused with Hypermode accounts.

In-universe, Hypermode behaves similarly to Mega Evolution but does not require an item. Any Pokémon that has been exposed to Zophan can temporarily undergo a Hypermode transformation, usually after experiencing excessive emotional stimulus. This will generally produce a state of higher aggression in the affected individual.

Changes that have been noted include:

Currently there are only a few known Moves in relation to the Zophan Type and Hypermode transformation.