A Z-Crystal is a type-specific, diamond-shaped gem that increase the chances of hatching an Albino Pokémon. The Ultranecrozium Z, while not a Z-Crystal, is obtained using Z-Fragments.

Z-Crystals are obtained at the Type Race. In order to obtain one, a user must score 200 personal points in the race, and everyone on the type team combined must meet a community goal of 2,000,000 points. Once those two criteria have been met, users will be able to get a Z-Crystal that matches the type of the team they were on.

Z-Crystals are used on the Albino Radar to boost its power as if it was a level higher. They are one-time use and disappear along with your first charge of the day (the effect lasts until the server reset at midnight time). If used on a Radar that is charged at level 7, it will raise the Radar's chances as though it was boosted to a hypothetical level 8. However, the Z-Crystal's power will only work on Eggs whose type matches that of the Z-Crystal. For dual-typed Eggs, so long as at least one type matches the Z-Crystal's, it will gain the boost.

A Z-Fragment is a shard of a Z-Crystal. Alone, it cannot be used to charge the Albino Radar. However, when enough fragments are collected, they can be combined into a complete Z-Crystal.

In order to create a Z-Crystal, 7 Z-Fragments of the crystal need to be assembled. They cannot be of different types. Only 7 Normalium Fragments will create a Normalium Z, for example. Once 7 fragments are obtained, they can be brought to the Albino Hunting page and put together under the Z-Crystals tab.

Additionally, 3 Z-Fragments of each type may be exchanged for an Ultranecrozium Z. 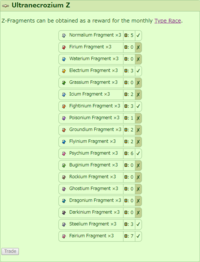