The Trade Centre is where the user may put their Pokémon up for trade or gift them to other users. The user is able to access it after they have completed the tutorial. It is found in the Nearby Places tab. There are five buttons the user can choose from underneath the title: Active Trades, Collection Area, Wonder Trade, Upgrades, and History.

Note: Eggs may not be traded.

Active Trades Page
This tab allows users to Set up a new trade and view both their sent and incoming trades.

Set up a new trade

This is for trading/gifting Pokémon to a certain user. The form is very straightforward:

Once the Sender is ready, they can click the button 'Set up the trade' to send the trade to the other user. A notification will be sent upon receiving a trade, a trade being offered on, or a trade being completed. Up to 5 trades can be sent by a user at a time, Pokémon in the Collection Area count towards this maximum. Unless the user has

When someone makes an offer on a trade, a notification will be sent to the trade owner. It will link them to the Trade Centre, where they may click on the Pokémon in their "Incoming: Offered" section. They may then either accept or reject the trade. If accepted, their Pokémon will be transferred to the Recipient, and vice versa. Both parties will now have the option of placing the traded Pokémon in their fields, visiting the Pokémon, going to PMs with their trade partner, and collecting all items and currency in the Trade Center.

If a trade or trade offer is rejected, a SYSTEM message will let the Recipient know that the trade has been rejected and a notification will appear to let the user know that they have received a trade request. 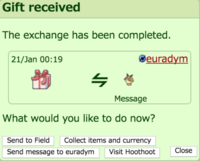 Options available to the user after accepting a Trade.

A user without any

Trade Centre Expansions will be unable to send any trades if they have 5 or more pending Trades. They will also be unable to accept any trades or gifts if there are 11 Pokémon in the Collection Area.

In certain events, special Pokémon are deposited in the Trade Centre for the user to collect.

Like most Nearby Places, the Trade Centre also has Upgrades that may be purchased. Currently, only

Trade Centre Expansions are available at the Trade Centre. They cost 1,000

Gold Poké each, and they increase the number of trades that a user can send by five and the amount of space in the collection area by ten.

History is a feature that allows the user to see the past 25 trades they made. It tracks all trades, including Gifts and Wonder Trades.