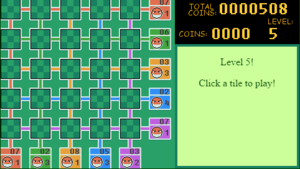 Voltorb Flip was an Event where users could play a Minesweeper style game. Players could collect coins and rise in level. The top players were awarded based on their highest level, the number of coins obtained, and their win ratio.

On May 27, 2014, Niet announced the top 20 players in each category: Highest Level, Total Coins, and Win Ratio.[1] These players received a Sylveon as a prize.

On July 1, 2019, Niet announced the top 50 players in each category: Highest Level and Total Coins. For the Win Ratio category there were a total of 56 top players due to several players tying for last place.[2] The first place players in each category received a Shiny Melmetal while the rest of the top players received a regular Melmetal as a prize.