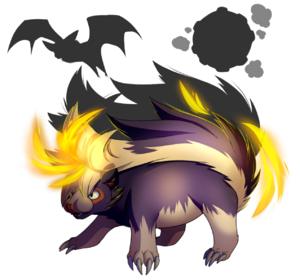 Drawn by DuchessLunaire.
Totem Skuntank Q is an Exclusive Pokémon released as part of the seventieth Mass-Click Weekend. It was released on the 31st of August 2020, in the form of a Super Totem Sticker.

The Totem Skuntank Q Exclusive was distributed as part of the seventieth Mass-Click Weekend of PokéFarm Q. Its Super Totem Sticker, along with a Megastone Voucher #5, was given as a reward to any individual user with at least 10,000 interactions during the event weekend.

"It attacks by spraying a horribly smelly fluid from the tip of its tail. Attacks from above confound it."