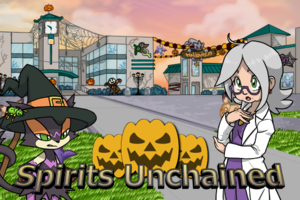 The Spirits Unchained event was an Event that ran for two weeks in 2017, starting October 30th and ending November 12th. During the event, users completed a list of tasks featuring Hallowe'en Witch Purrloin and its evolution. At the conclusion of the event, the Vampire Line from the original PokéFarm was introduced.

The user enters the town, and Professor Holly approaches them, asking them to help others prepare for Hallowe'en. As they do so, they are approached by Alex, who asks for a Gliscor so she may enter a costume contest. The user retrieves her one and she leaves to go dress it up. Meanwhile, the user overhears a robbery, and is promptly asked by Professor Holly to help look for a small purple Pokémon. The user decides to check the Scour Areas first, and seemingly finds nothing until the thief, a Purrloin, appears. Purrloin flees and the user chases, eventually grabbing him and bringing him to the town where Professor Holly is waiting. Professor Holly asks Purrloin to return the Mismagius Costume he stole, but Purrloin gives cute begging eyes, and after a short stare-down Professor Holly allows Purrloin to borrow the costume for Hallowe'en. She dresses him up in it and he saunters off, proud of his "heist."

Things calm down and the user returns to Farming. After a little while, though, an ominous fog rolls into town, and Professor Holly comes to the user and says that Purrloin is stealing more things. The user catches up to him in Pledge Grove, but he's already being confronted by Cobalion, Virizion, and Terrakion. After scorning Purrloin, Cobalion hands him over to the user and orders them to take him to town for punishment. On the way back, however, Purrloin attacks. The user manages to subdue him after a short battle and carries him the rest way home.

Back in town, the entire place has been invaded by ghosts. Professor Holly, upon seeing the user, asks for a Dusknoir so it can send the spirits back to where they came from. The user gets a Dusknoir, then roams around to help anyone in need. After a while, Dusknoir yells for help, and the user comes over to find Giratina and Dusknoir in confrontation. The user fights Giratina and manages to beat her. Giratina vanishes back to her realm. Dusknoir returns to its ghost-dispelling duty, but there are too many ghosts-- it will need help. Purrloin then appears and offers to help, and joins the user's party to do so. He's weak, however. The user helps him grow stronger and eventually evolve into a Hallowe'en Witch Liepard. With his new strength, Liepard successfully helps Dusknoir round up the spirits and send them home.

Two days later, after the mess has ended and things are cleaned up, Professor Holly approaches the user and thanks them. She also says that Giratina isn't a bad Pokémon; she simply got out of control. Alex then pops into the conversation and tells the user, who had been too busy to attend the costume contest, that their Gliscor won first place. However, during the Hallowe'en troubles, something strange came over Gliscor and it fused with the costume it was wearing. She apologises and returns the now-Vampire Gliscor, and then gives the user the Premium Box she won in hopes of being forgiven.