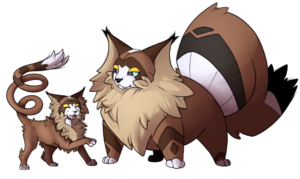 Drawn by Duchesslunaire.
The Siberian Line encompasses Siberian Glameow and Siberian Purugly which were released as part of the eighty-fourth Mass-Click Weekend on the 1st of November 2021 and are Exclusive Pokémon.

Siberian Glameow can be obtained by trading with other users or by breeding with a parent of the Siberian Line.

Siberian Glameow was distributed as part of the eighty-fourth Mass-Click Weekend on PokéFarm Q. Its egg was given as a reward to any individual user with at least 10,000 interactions during the event weekend.

A brown Egg with a dark marking in the middle and white markings on the top and bottom. It's oddly cold.

This Pokémon is most content with cold environments, and can often be found running around the snow with elegant movements, almost seeming to dance. When the surroundings become warmer, its mood constantly shifts.

The pattern on its tail appears to be an angry face. Unsuspecting foes that have wandered too close to a Purugly's nest will flee just at the sight of it.